Gist: Nigerians mock Bobrisky as his dirty and torn underwear leaks in video while speaking 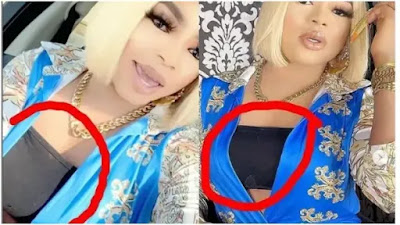 Nigerians on social media have mocked cross-dresser, Bobriksy for wearing a torn dirty underwear while addressing them in a video.

Bobrisky in the video was telling women it is slavery for them to go to their men’s house while dating to cook.

But then fans noticed something else — a dirty, torn underwear.

This however generated a lot of comments as Nigerians went on to mock him.

Some of their reactions below…

@helenvincent3344 wrote “All that glitters is not gold”

@favourite_harmony wrote “Na that breast tube them gum the thing wey be like breast put for bob..That’s why he can’t change it cause that’s the only breast he has”