The Bassange didn’t migrate out of KinNupe in one fell swoop or in a single exodus. It was simply a continuous stream of refugees fleeing the wars within KinNupe. 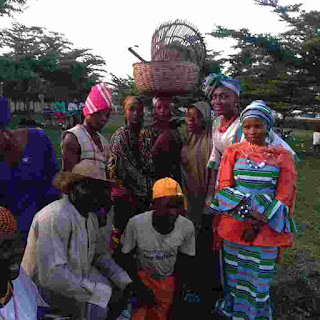 Though there were documented instances of large collection of families leaving Gbara, the capital city of the Eastern Nupe kingdom under late Etsu Jimada, en masse in those days. These movements of the Igbara or Gbara Nupe people out of KinNupe and towards the southeast eventually led to concentration camps of refugees who eventually coalesce to form the people that came to be known as the Bassange.

The Journey from Central KinNupe

In any case the Nupe people known as Bassange today left Central KinNupe at the end of the 18th century due to civil war going on between the three Nupe contenders – Etsu Nyikanko, Etsu Majiya and

These Gbara people first settled down to a life of fishing, canoeing and some little farming on the banks of the River Niger. But, and unfortunately for them, the enemies of the late Etsu Jimada of Gbara, that is Etsu Zubairu Majiya and his Fulani allies under Mallam Dendo, became the paramount rulers of the Nupe Nation and these new rulers of Nupe, particularly the Fulani rulers at Raba, continued to harass the fugitive Gbara (i.e. Bassange) people settled on the banks of the River in today’s southern KinNupe.

But some half a century later, in the 1840 to 1850 period another serious Civil War broke out in KinNupe between the sons of Mallam Dendo and Etsu Tsado the Terrible. This Civil War threw the entire Nupe Nation into a convulsive tumult and forced the Gbara Nupe people (now known as the Bassange) to cross the River Niger to the southern banks.

In the beginning these Igbara or Gbara (now known as Bassange) people were only settled along the banks of the River Niger in Southern KinNupe. But then the rise of the various Nupe-Fulani emirates throughout KinNupe and the consequent internecine wars further drove the Ibara or Gbara people further southwards.

So even after crossing to the southern banks of the River Niger the Nupe-Fulani Jihadists came to exert the sovereignty of their Emirates over the Igbara and subjected them to heavy taxations and tribute-paying.

This continuous harassment and heavy taxation of the Gbara people by the new Etsu and Fulani rulers of Nupe forced the Gbara people to move and extend in further southeast-ward direction through the Koro and Yagba until they came to live among the Bunu of Kabbaland in today’s Kogi State.

The sojourn of the Igbara or Bassange among the Bunu, however, didn’t last long. In the beginning they were well received by their new hosts but with time tensions arose over farmlands between them and their hosts. It is reported that at a time the Bunu confiscated all the lands they had initially given the Igbara or Bassange and that led to starvation of the Bassange who were then forced to move out of Bunuland and continue with their south-wards migration.

They continued southwards until they came to occupied the Niger-Benue Confluence at Lokoja and even beyond. At a time this Gbara (Bassange) people became the major inhabitants of Lokoja. At Lokoja they first settled on and around the Mount Pati which actually derived its modern name from the Bassange name for it as ‘Pati Lukongi’. But then Etsu Masaba’s army laid claim to the Lokoja general area and before long Masaba’s army have come to encamped at Lokoja. The Masaba threat forced the Bassange people to simply cross the River Niger to their present location on the eastern banks of the River Niger. 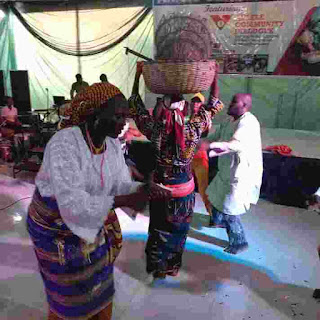 There is a story that even before the coming of Masaba’s army to Lokoja a Bassange hunter called Eshida had already crossed the River Niger unto today’s Bassangeland and have already set up an hamlet beside the Takun Kporo or Eriwota Rock. So when the Masaba threat became too real the main population of the Bassange at Lokoja simply fled across the River Niger to a place they called Kpata in today’s Bassangeland.

The Bassange In their Present Location

As the population of the Bassange increased in their new place they were welcomed by the Attah of Igala. The Attah of Igala gave these Nupe people stretches of land in the Bassa country. That was how these original Nupe people from Central KinNupe first came across the Bassa people and the Bassaland of today’s Kogi State.

To differentiate the new arrivals from the old Bassa Komo people these Gbara Nupe people began to be referred to as the Bassange. That was how they got the name Bassange with which they are still referred to this very day.

Colonial authorities consequently granted the Bassanges some measure of autonomy from the Attah of Igala and this became the norm when the Colonial Government became firmly established. Anyway, the Bassange became very close, and even acculturated, with the Igalas.

Due to their minority status in Kogi State the Bassange people are facing all manners of humiliation and oppression in the political setup of Kogi State. A former civilian Governor of Kogi State was alleged to have declared in the public that he can do without the political clout of the Bassange at the electoral polls because the entire population of the Bassange “cannot even fill a pick-up van.” The marginalization and neglect of the Bassange people is aptly illustrated by the fact that the Bassange have for decades yearned for a bridge to be built across the River Niger from Lokoja to Shintakun, a major Bassange town, but successive Kogi State administrations have flatly refused to construct this lowcost bridge for the simple reason that the Bassange have not the political or economic clout to persuade these administrations to build the bridge. A bridge from Lokoja to Shintakun across the Niger will bring instant economic and sociocultural development to the Bassanges.

The Bassange today are a very progressive and highly determined people who want to be reconnected with the main body of Nupe people back here in Central KinNupe. One major way to achieve this will be the creation of Edu State of course. The proposed map of Edu State actually included today’s Bassange land in Kogi State. In other words the Bassange part of Kogi State has been incorporated into the map of Edu State.

All praised due Almighty Allah for spare our life and give us strength to bring out this article. This complete work / project is work of Dr Ndagi Abdullahi for more history visit NdagiAbdullahi.com