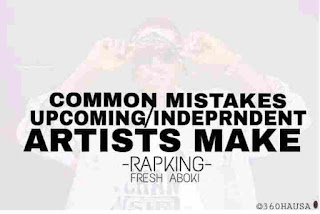 One Of the mistakes upcoming artistes make is they release Album or E. P too early. Why the rush when you have a long way to go? The best way to be known is by dropping singles. Promote those singles with all your might until people get to know that single. Drop as many singles as you can until you are famous. An example is Teni. Despite her fame and years in the industry she only dropped an E. P not long ago. And the only song that trended was “billionaire” because she could not focus on promoting all the songs.

Lastly, The biggest mistake upcoming artistes make is lack of promotion. They find it so difficult to promote themselves. But why would you drop a song when you know you can’t promote it? The first thing you are supposed to put at the back of your mind when dropping a song is promotion. Because with a good content without promotion nobody will know it