Biography of hushpuppi and net worth

Ray Hushpuppi has been an internet sensation ever since he came to limelight with his extravagant lifestyle and that’s why many of his fans wants to know the type of business he does, his source of wealth, where he is from, his state of origin and that’s exactly what we shall be answering in this post.

Hushpuppi whose real name is Raymond Igbal odely is a popular Nigerian socialite and philanthropist born on June 14.

He was born and raised in Lagos state part of Nigeria but resides in Malaysia.

Hushpuppi is a Malaysian based Nigerian big boy who became known over the media when he and his close associates, Mompha and Classicbaggie kept on giving fans something to talk about over their lifestyle. 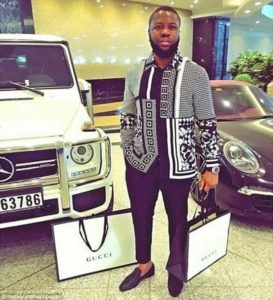 He had a little misunderstanding with his so called group which led to Mompha revealing some his privacy like his father is a taxi driver and his mother a bread seller.

Although, Ray Hushpuppi didn’t actually tell us what he does for a living, but says he’s a beggar and used to be a gambler.

He had so many controversies with musicians in the country including with P hyno, Patoranking and Ice Prince whom he accused them of wearing fake products.

One thing we are sure of is that Hushpuppi is a real lover of Gucci products which he does not hesitate to flaunt on social media.

Ray Hushpuppi has a lot of expensive cars in cluding latest Rolls Royce, Range Rover and so on. He is one of the most influential Nigerian socialite with an estimated net worth of $20 million dollars.